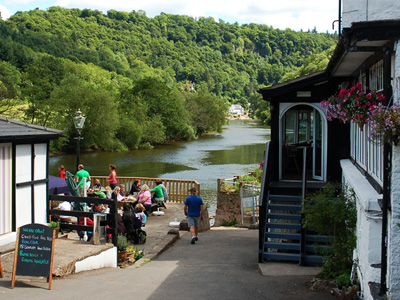 Jamie donates a bi-monthly gift of a stay at the Inn plus a £50 meal voucher which many of our applicants have received as a gift from ‘Something To Look Forward To’.

Jamie has also developed a specialist beer which he sells at his pub and donates a percentage of the proceeds to our charity.

He has also supported, and been involved in our Paddle Boarding fundraising events which has helped us raise a vast amount of money to run the charity.

We would like to say a massive THANKYOU to Jamie for all his help and support over the years; he is an absolute star!!!

“My stay at Ye Old Ferrie Inn was so lovely, it left me feeling relaxed and a lot happier, a night away from the normal in a wonderful tranquil location.

It took our mind off the world we are in right now, with hospital appointments and constant fear.”

“Having this break gave us time to be together and to enjoy the beautiful surroundings. We had never visited that part of the world before and thought it was gorgeous.”

“Ye Old Ferrie Inn in Symonds Yat was absolutely amazing! Everyone was so lovely and welcoming; it was so good to spend time with my husband.”

“The trip was so wonderful, it reminded me that cancer is only a small part of my life and I have lots of other things to do and see.”

Climb Ben Nevis but in Cambridge!

Up Ben Nevis on Clip ‘n Climb’s indoor climbing walls in under 90 minutes.

A guy and a girl making pyjamas that will change your Sundays forever!

Instrumental in forging our partnership with The City Pub Group

Sourcing spa breaks and gifts for people affected by cancer

Photobooth for our next event!

A donor that can't stop helping!!!

Climb Ben Nevis but in Cambridge!

Up Ben Nevis on Clip ‘n Climb’s indoor climbing walls in under 90 minutes.

Swimming a combined distance of over 54 miles

We are proud to be Epic Festival 2019’s chosen charity

Stingray, honed from the live pub and club circuit bring their vibrant performance to The Blue Moon, Cambridge

Join us at the TriSudbury 2019 SPRINT Triathlon!

We are extremely excited to become the chosen charity for the TRISudbury SPRINT Triathlon 2019.

It's not every day you find a Two Michelin Starred chef flippin' bacon on the market!

Read more
Andy Coldron2019-09-02T11:54:56+00:00
'Something To Look Forward To' has updated its cookie policy. We use cookies to ensure that we give you the best experience on our website. A number of cookies we use last only for the duration of your web session and expire when you close your browser. Other cookies are used to remember you when you return to the Site and will last for longer. » Find out more about cookies » Change your cookie settings By clicking "OK" or clicking into any content on this site you agree to allow cookies to be placed. we'll assume that you are happy to receive all cookies on our website. Ok
Go to Top