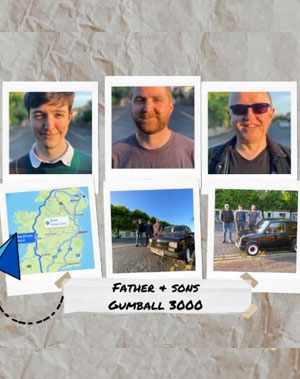 Gemma is a 1999 Polski Fiat 126, and the star of the show. Built in Poland last millennia, known as the people’s car, and nicknamed ‘Maluch’ it is extremely small and powered by a tiny two-cylinder engine. Connor bought Gemma after spying it online whilst he was self-isolating with COVID. Connor decided life was too short not to act on rash impulses. Following a complete mechanical re-build over the last two winters, Gemma is now, finally ready for adventure.

The challenge is a homage to the gumball 3000. A 3000-mile rally on public roads, where rich and celebrity entrants drive high speed, high value supercars long distances, staying in high end hotels. Our rally will be a father and two sons driving one of the worlds least valuable cars and staying in tents.

Our no-frills rally will run from Malin head at the top of Ireland loosely following the west coast over 600km to Mizen Head at the bottom of Ireland.

Fundraiser Not Another Bunch Of Flowers

You could give people ‘Something to look forward to’ by doing your own sponsored event.

We can support you by setting up an online fundraising page and will offer you advice regarding promotion of your event.

We can also supply a fundraising pack including a T-Shirt and marketing material. Thank you in advance!

Yes I want to do something!!!!
Andy Coldron2022-06-07T16:43:49+00:00
'Something To Look Forward To' has updated its cookie policy. We use cookies to ensure that we give you the best experience on our website. A number of cookies we use last only for the duration of your web session and expire when you close your browser. Other cookies are used to remember you when you return to the Site and will last for longer. » Find out more about cookies » Change your cookie settings By clicking "OK" or clicking into any content on this site you agree to allow cookies to be placed. we'll assume that you are happy to receive all cookies on our website. Ok
Go to Top